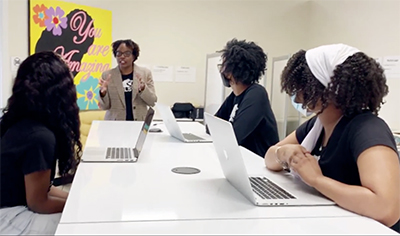 We’re excited to share that our Girl Ambassador Program made front-page news in the Richmond Times-Dispatch as we celebrate the four-year mark of this growing, successful program! Here’s the full article for those who missed it.

For those interested in being a Girl Ambassador Participant or Hiring Partner, check out our programs page and Look Book here. 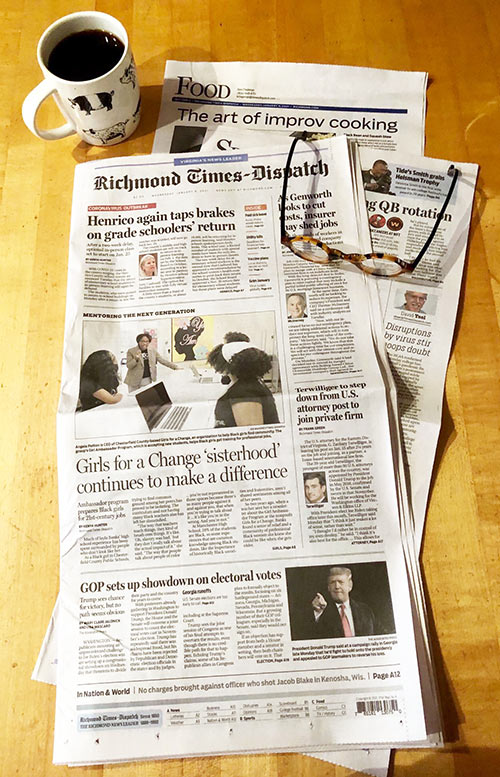 Much of Jayla Banks’ high school experience has been spent surrounded by people who don’t look like her.

As a Black girl in Chesterfield County Public Schools, trying to find common ground among her peers has proved to be isolating. The curriculum and not having many Black teachers also has left her dissatisfied.

“The way that teachers teach things, they kind of brush over things. It’s like, ‘Oh, slavery was bad,’ but they don’t really talk about the actual impact of it,” she said. “The way that people talk about people of color … you’re not represented in those spaces because there’s so many people against it and against you, that when you’re trying to talk about it … it’s like you’re in the wrong. And you’re not.”

At Manchester High School, 28% of the students are Black, so some experiences that are common knowledge among Black students, like the importance of historically Black sororities and fraternities, aren’t shared sentiments among all of her peers.

So two years ago, when a teacher sent her a newsletter about the Girl Ambassador Program at the nonprofit Girls for a Change, Banks found a sense of relief and a community of professional Black women she knew she could be like when she gets older.

“There were a whole bunch of Black people on there,” she said. She instantly saw a place that could help her achieve her dreams of becoming a lawyer and possibly starting her own law firm. “I was like, ‘Oh, wow! They look like me. Let me hop on that!’ ”

Angela Patton founded Girls for a Change in 2000, hoping to give Black girls a place to learn who they are and that they’re important. It’s based in Chesterfield. Four years ago, she launched the Girl Ambassador Program that Banks is a part of. It helps Black girls prepare for life after high school by training them in computer skills, placing them in summer internships, and bringing in guest speakers, who are often professional Black women.

Patton said the program started because she saw a need for Black girls to feel represented in professional spaces.

“We really saw Black girls being underrepresented in their schools and their communities, in the workplace, you name it,” she said in an interview. “Our children are not always in the position [to know these things] because they just don’t have access to know that there’s greater out there.”

In schools and professional spaces, Black women experience a unique sort of discrimination that can even be overlooked in the Black community. It ranges from hair discrimination — which has inspired some states to pass the CROWN Act to ban businesses from discriminating based on the way someone wears their hair — to being deemed less qualified for jobs.

In 30% of Virginia’s school districts, Black girls are three times more likely to be suspended than their white counterparts, according to the Virginia Department of Education. And in workplaces, according to the National Women’s Law Center, “Black women working full time, year round typically make only 61 cents for every dollar paid to their white, non-Hispanic male counterparts.” That equates to Black women earning almost $1 million less than white men over a lifetime.

One reason, according to the study, is that women and Black people are over-represented in low-wage jobs, an experience that Patton can relate to.

“When I was in high school, and I was working, it was only Black people working there,” she said. “It wasn’t my white peers in my school working at the fast-food stores in restaurants. They weren’t at the day care centers where I was working, or the retail stores.”

But she wants girls to be inspired by making their own lanes in professional spaces and by entrepreneurship.

One student, Iyanna Hardin, who has been involved with Girls for a Change since seventh grade and is now in 11th grade, said the Girl Ambassador Program assisted her in starting her own cosmetics business, Iyanna Moné Essentials.

“There’s a real sisterhood in Girls for a Change,” Hardin said. “I know personally coming from Richmond, sometimes opportunities aren’t awarded to girls who look like me. Programs that offer these kinds of skills and different things like that, you just basically just don’t see, or it’s very hard to get into and it can be a very costly type of program.”

When she decided she wanted to create her own cosmetics line, she was about to pay someone to do her logo, she said. Then she got all of the training for free in the Girl Ambassador Program and was placed in an internship with Sassy Jones, a Black woman-owned jewelry and accessories company based in Richmond that is one of the fastest-growing businesses in Virginia. There, she said, she was able to learn how to sell her products online and have a social media presence that has kept her business running for about a year.