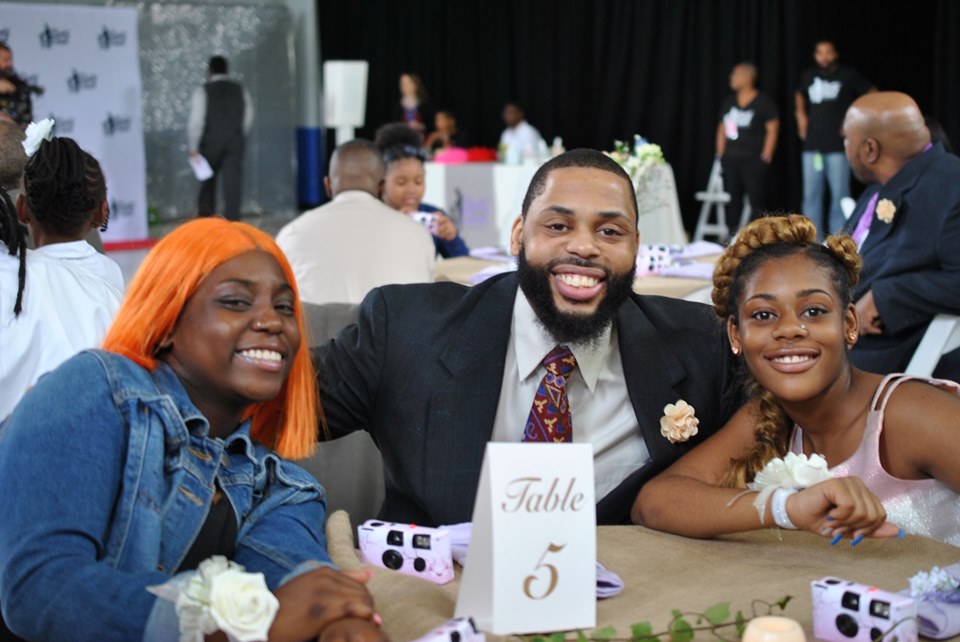 Dressed to the nines, girls and their father’s enjoyed a meal, live comedy, dance, games, and other heart-warming activities all under the roof of DC’s Department of Corrections. The DC Corrections gym was decked out in lights, a red carpet, flowers, and tables. Each girl got to walk the red carpet with their Dads, had their pictures taken at the Silly Booth, made collages, journaled, played, and danced. Thanks to facilitators Chad L. Coleman, actor in “The Walking Dead”, “The Wire”, and “Arrow” and Joe Clair, comedian, TV personality, and radio host, the Date with Dad dance was an utter and complete success!

The History Behind Date With Dad

The father-daughter dance known as “Date with Dad” is an event to give girls a unique opportunity to build strong bonds with their incarcerated fathers. The original goal of past dances, hosted by former Richmond, VA Sheriff C.T. Woody, Jr.,was to give girls much-needed bonding time with their fathers during a special visit without the usual barriers between them, and in the process, hopefully, reduce recidivism for the fathers. Clinique Chapman who was inspired by CEO Angela Patton’s talk at TedxWomen about “Date With Dad”, read more about the event, watched coverage of previous dances, and reached out to Angela to see how it could be implemented within the DC DOC facilities.

The goal of this DC dance was much the same. All activities during the event were not only be geared toward fathers and daughters bonding and creating memories but also toward showing them ways to keep their relationship as strong, healthy, and positive as possible during the fathers’ incarceration.

Reflecting on the event, Chapman says she hopes fathers “find a newfound motivation to succeed upon reentry and daughters feel empowered, confident, and loved despite not having their fathers involved in their daily lives. I hope for the girls to not feel ‘less than’ because their fathers are incarcerated.” Ultimately, Chapman adds that she hopes this event “will allow one less father to return to jail or prison, and one less daughter to ever become involved in the justice system.”

In preparation for the event, the fathers participated in a series of sessions on responsible fatherhood facilitated by a family life coach certified by the National Partnership for Community Leadership. As a special part of their preparation, the men learned how they can still parent from the inside, and in the process, keep their connection with their daughters, and other children, strong. Mothers were also prepared for the event by attending special workshops and will attend another session while their daughters attend the dance. Overall, the goal of the sessions was to prepare both parents for the experience and how to support and parent their daughter(s) before, during and after the event.

We encouraged our Dads to make a commitment to their daughters to stay out of jail and to remain connected to them as their fathers. Ultimately, what we did on Saturday was change the narrative for these families. We sparked a unique connection between fathers and daughters – whose relationships are strained due to incarceration. We allowed the girls to see their fathers in a different light other than the one of an inmate in an orange jumpsuit, and we reminded these Dads of the girls who were on the outside awaiting their return.

Check out all of the amazing moments Joel Edgerton captured at the Date With Dad Facebook Page!

Posted in General and tagged DC, Father-Daughter
← Opportunity Happens When You Breakdown BarriersHow I Become An Artist In A Week →